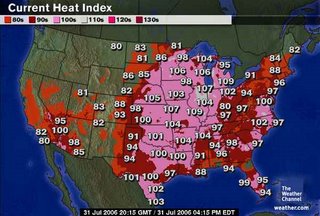 Look at the pictures.
Posted by Umlud at 4:54 PM No comments:

It's our turn for hot weather soon. 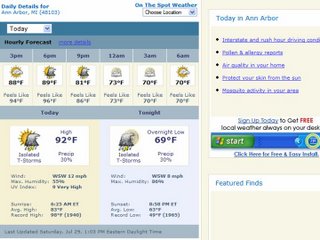 Okay, so it isn't as hot as it was in California. It isn't the record temperature, either (that was set in 1940 at 98F, if you can't see the picture). However, this is a slightly disturbing feature. I don't think that people in Ann Arbor are really prepared for temperatures in the mid-90s. Hopefully the forcast of lower temperatures in the next week are right. Otherwise, it will be problematic for many people in a town which is not known for having a lot of airconditioning.

Of course, as our Enlightened Leader, the Great Decider, global warming is not a subject of imminent concern. That means that, according to the Great Enlightened Decider, this cannot be global warming (since it is happening "imminently", as it were). Since it is not global warming, this slight uptick in the average weather be something we shouldn't worry about. Therefore, we should just get us some watermelon, sit outside with a glass of iced tea, and have not a care in the world!

Fart Fair is done yet again. And yet again, I have not purchased any pieces of fart. I DID pick up a pair of speakers at a friend's yard sale, though. Although I am moving in about three weeks, I figured that the purchase was well worth the price and slightly increased moving volume.

The photos of the vast sea of people descending on Ann Arbor on Friday was dwarfed by what showed up on Saturday. Amazingly all gone by Saturday evening, the town was jam-packed with the Upper Midwest's finest. Never before had I seen (or mentally acknowledged) the vast numbers of large people in Walmart shorts and t-shirts, walking about under the sun.

Sabrina's aunt and uncle came in from Cleveland for Saturday, and, after taking us out to dinner, we all went to see Sabrina's cousins' baby (now three weeks old). As expected, little Dylan has more hair (sticking up all which way), and his nose is less squshed than previously. Also, he turned out to be more responsive than before, tracking his mother's voice as she moved around the room. I'm sure that I will have my own photos of baby to share, so I will (still) hold off on posting them.


My bro is coming to MI in August, so it will be nice to hang out for some little bit of time before he becomes a practicing professor at William and Mary.
Posted by Umlud at 2:03 PM No comments:

The rain this morning cooled the city down. However, it also increased the humidity. My office is now a cool sauna of just pure pleasure. (Please note the sarcasm dripping off that statement just as easily as sweat is dripping off my forehead.)

I am thinking how nice it would be to A) close off the doorway to the perpetually-hot scale room, B) have insulation in the roof to decrease the amount of midday heating, and C) have an air conditioner cool off the rear attic offices.

The temperature is likely to reach the upper 80s in SE Michigan. Yum... "We're having a heat wave, a tropical heat wave. The temperature's rising, it isn't surprising, the attic certainly can, heat up."
Posted by Umlud at 11:37 AM No comments:

Ann Arbor art fair is started. Already I have been out and about perusing the many pieces of schlock-art available for purchase. Occasionally, I find a diamond in the rough, but (like diamonds), I cannot afford them. (Nor would I really know what to do with the stuff.) So, as always, I end up walking around the streets looking at the stalls much like I was at a museum of "Art-of-Varying-Qualities." As in years' past, these artists are a little touchy when it comes to having photographs taken around their pieces of work (as if I would really be able to reproduce a woven hat based on a photograph, or a fresco made of faux plaster), so no photos for now. However, I think I will take some of the larger installations that are less likely to be purchased, and more likely to be photographed by people in general.

The weather is cooler than it was a few days ago, but the general trend seems to be keeping it up in the mid-80s or higher. (On an historic side note, London apparently reached record temperatures of 93F, and over 100F in the subways. This was reported to have been warmer than Rome or Madrid. Who says global warming is an issue? Oh yeah, I do.) On the note of weather, large gusts of wind two nights ago cut the power to my block. It was not restored for over 20 hours. Luckily, yesterday was not as hot as the day before, so my fridge contents were not subject to a slow bake over the course of the day.

I have a small hidden desire for large gusts of wind to bring about much chaos at the myriad of art fair booths. It would be interesting to photograph the artistic carnage...
Posted by Umlud at 9:18 PM No comments:

I don't know who came up with the saying, "Rasters are faster, Vecters are 'correcter'..." but I want to get that person to explain why this is the case. I'm having so many projection errors with all the different rasters I'm working with. AAAARRRGH!!!

I know that one of the reasons is due to ArcMap's current inability to project vector features into raster features using the Michigan GeoRef coordinate system. (This is highly annoying, since everyone seems to want to use MIGeoRef.) Another problem is coming with the orthophotos, which have just recently decided to not line up with my TIN or vector features! Annoyances are mounting, and my urge to hit something hard is also increasing (mitigated and frustrated by the knowledge that pounding on the computer will do more harm than good).

Must... breathe. Let the anger out. Think upon calm thoughts. Look out the window. Pray for rain. Get a cup of coffee... Something... other... than... anger... (It is, after all, only a computer program, and can only work with the data it is given, and the parameters within which it is supposed to work. There is no need to get angry with an unreasoning machine that is merely reacting in a manner consistent with its programming. And, yet, GIGO really does get on my nerves.) 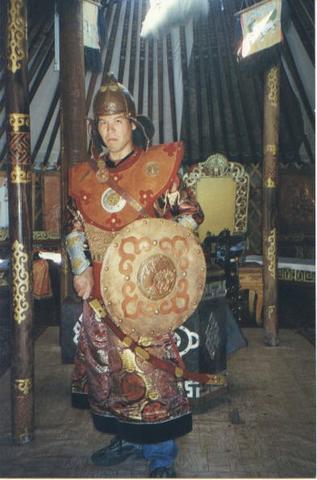 Today is the start of the Naadam festival in Mongolia. It brings us to think about history, and the changing of the entire Old World by Genghis Khan. A celebration of a bloodthirsty warrior/father of a country, and near deific constant leader of the Mongolian peoples. In 2000, I took a trip to Mongolia during Naadam, and it was an amazing celebration of horsback races, wrestling, archery (from horseback), and traditional singing. So many of these practices migrated with the Mongols to where they conqured, including Japan. Although I'm not a historian (meaning that I have no proof of this), I strongly believe that Japan and Mongolia are closely related, both as a people, as well as specifics of culture. Japan was invaded twice by Mongolia, and it is difficult to imagine that nothing had "rubbed off" on Japan from those invasions. Two that come to mind are the saddle and horseback archery. The Japanese saddle and the Mongol saddle were very similar. In addition, the creation of a horseback bow came about after the Mongol invasion. Luckily, the penchent for goat and sheep meat didn't stick with Japanese culture. If you have never had pressure-cooked goat or sheep, let me tell you that it has a lot of fat, and even after being cooked at super high temperatures, it is still very very tough. Additionally, boiled blood sausage is not a big point of interest in Japan (nor is butter tea and yak's milk). We must be thankful for the small blessings in life I suppose.

Anyway, happy Naadam!
Posted by Umlud at 7:50 PM No comments:

The destruction of the old business school building (to make way for the new Ross School of Business building) lets you see the back side of the School of Economics. I like taking these sorts of photos, since it shows a view that will likely never be seen again. It is also the only way that I could get the whole length of the Econ. Dept. without either stitching photos or investing in a wide-angle lens and then correcting the image with Photoshop. Econ. Dept. as seen through the rubble of the old Business School
Posted by Umlud at 8:00 PM No comments: