I don't know if it's because I am the child of two different countries, or just because I like to think about these sorts of things, but I have long thought about the reality of my highly contingent existence and how it maps on to the reality of my very lived experience. How can I exist, given all the potential possibilities of mixtures between egg and sperm that could have happened? And, even if a genetic twin of me existed, how could that person be me, given all the different ways that my environment shaped me vs. how even minor changes in environment would have differently shaped that twin? (And then scale that to all the potential changes to me and my forebears through time.)

A hint of that popped into my head when I saw this graphic: 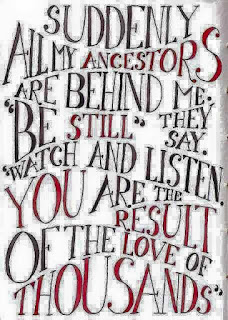 To me, the message was incomplete. While you may be the "result of the love of thousands [of ancestors]," you are also the result of a random chance meeting between one of several million sperm (each one a random assortment of half your father's genes) and one egg (which was a random assortment of half of your mother's genes) of several million that happened to be the one that matured, developed under gestational influences that caused certain epigenetic predispositions to be expressed in addition to the genetic expressions encoded in your genome, raised in a specific time and place in world history among a random assortment of peers, and made a series of unreplicable personal decisions in concert with the personal decisions and actions of those around you, which - if any one of the countless variables had been different (amongst your peers, in you, and amongst all of your forebears and your peers forebears) - would have resulted in a completely different timeline of existence than the one in which those particular ancestors stood behind the particular person you recognize as yourself.

But it's likely that those different ancestors would have told that different self that they were the result of a differen set of thousands bestowing their love.

IOW: Your entire existence (and the existences of everyone you know and don't know) are highly contingent and effectively random. But that doesn't change the simple fact that you're here as a result of the effort and love of those who came before you.
Posted by Umlud at 12:00 PM

Email ThisBlogThis!Share to TwitterShare to FacebookShare to Pinterest
Labels: No easy category